IN TODAY'S HOLI, ALL YOUR HAPPINESS AND PAIN BURNS AWAY AND ALL THE COLORS OF TOMORROW'S RANGPANCHAMI SHOULD BE FILLED WITH HAPPINESS IN YOUR LIFE. "HAPPY HOLI". 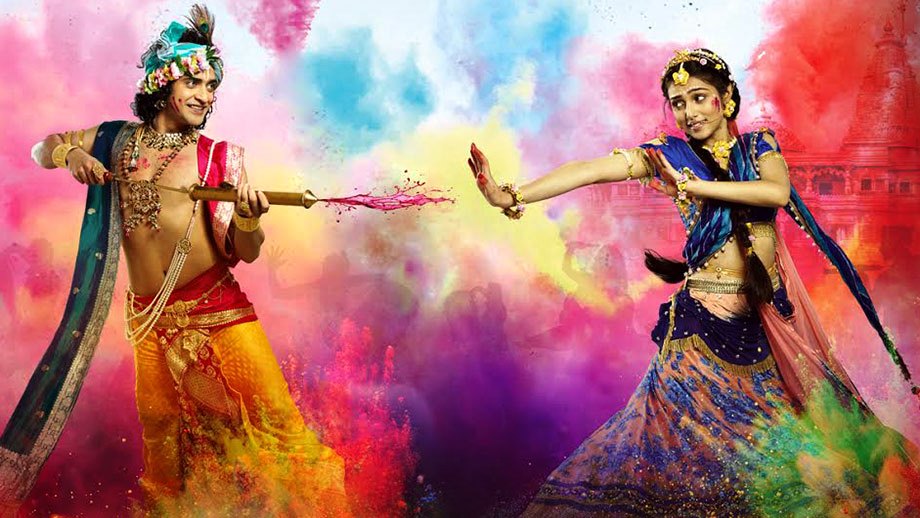 Festival of Holi
Holi is a festival of color and harmony, which everyone celebrates with full fervor and joy, irrespective of religion. Adorned with colors full of love, this festival gives the message of brotherhood, opening the bonds of every religion, sect, and caste. On this day, all people forget their old complaints and hug each other. Children and youth play with colors. This festival is celebrated on the full moon in Phalgun. Many stories are associated with Holi. Holika is lit one night before celebrating Holi. There is a popular legend behind it "Holi Colours".

Most Famous Story Behind Holi 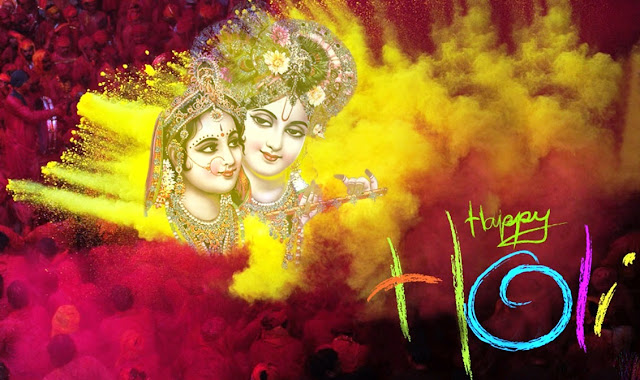 Devotee Prahlada's father Hariyanyakaship considered himself God. He was opposed to Vishnu while Prahlada was a devotee of Vishnu. He stopped Prahlada from doing Vishnu devotion and when he did not agree, he tried to kill Prahlada.
Prahlada’s father eventually seeks help from his sister Holika. Holika had the blessing of not burning in the fire. Holika agrees to assist her brother. Holika sat with Prahlada in the pyre, but Prahlad was protected by Vishnu's grace and Holika was burnt to ashes.
This story tells that good always dominates evil. Even today, on the full moon day, Holi is lit and the next day everyone applies gulal, abir and different colors to each other. This festival is a festival of colors "Holi Colours".
On this day, people wake up in the morning and go to their relatives and friends' house with colors and play Holi with them fiercely. This festival holds special significance for children. He brings a variety of squirrels and balloons from the market the day before. Children enjoy Holi with balloons and squirrels with their friends.
Everyone forgets hate and hugs each other. The women make sweets, ‘GUJHIYAS’ etc. a day before and share in their neighborhood. Many leave the Holi team and call them Huriyare.

Holi of Braj, Holi of Mathura, Holi of Vrindavan, Holi of Barsane, and Holi of Kashi Are Famous All Over India. 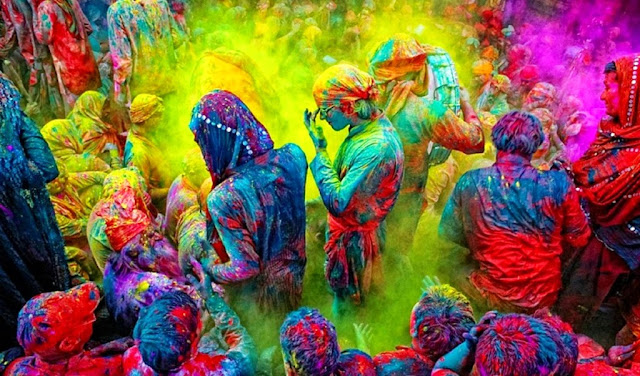 Nowadays good quality dyes are not used and skin damaging colors are played. This is completely wrong. On this happy festival, one should stay away from chemical paste and intoxication. Children should also be cautious. Children should play Holi under the supervision of elders. Throwing balloons from far away can also cause eye wounds. Colors should also be prevented from entering the eyes and other internal organs.

Fun-Filled Festival Should be Celebrated Together. 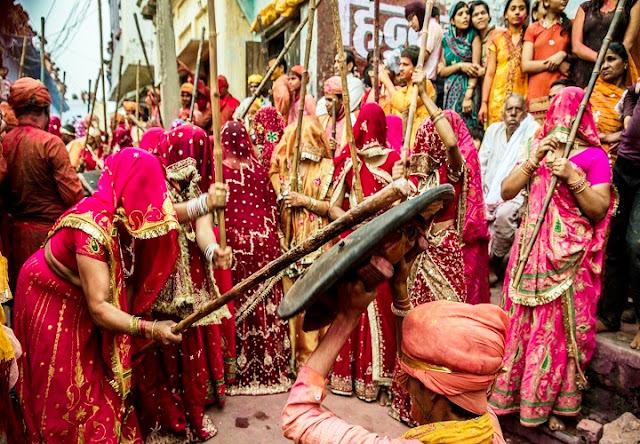 Holashtak concludes with Dhulendi. What is love, whose is it...
To worship Holika, the place of Holika Dahan is purified with Ganges water. A stick is then installed at the crossroads of the area for Holika worship. Piles, wood and grass are put into it and piled up. Broken wood from the trees is used for Holika Dahan and some wood is added to this pile daily. On the day of Holashtak, 2 poles are placed for Holika Dahan. In which one is considered Holika and the other is Prahlad.
According to mythological classical beliefs, no auspicious work is done in the area where a stick is placed for Holika Dahan. It is bad to do auspicious work these days. This year Holashtak will be from March 5 to March 12. All auspicious actions during this eight days are considered taboo. Holika Dahan will be played on March 12 and Dhulendi on March 13. 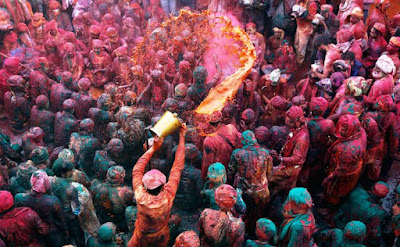 According to popular belief, in order to break his austerities, Lord Shiva incinerated Kamadeva on the Phalgun Shukla Ashtami Tithi. Kamadeva is considered the god of love, because his incarnation caused a wave of mourning in the world. When Kamdev's wife Rati apologized to Lord Shiva, Shiva assured Kamdev to revive. After this, people created a ruckus. It is considered one of the reasons for the end of Holashtak with Dhulendi. 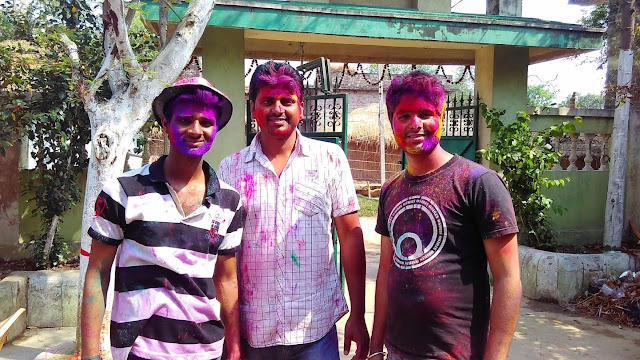 Holi is celebrated every year in the month of Phalgun (March) with a variety of veins. Holi is a major festival of Hindus known in major festival rooms. But not only Hindus but all people celebrate it. Because Holi is celebrated with enthusiasm. On Holi, people meet and hug and celebrate the festival of Holi by applying color to each other. Religious and Fagun songs are also sung during this time. On this day, we eat specially made gujhiyas, papad, halwa etc. Holika Dahan Rang is done a day before Holi.
The festival of Holi in India is celebrated in different ways in different regions. Even today, Holi of Braj is a center of attraction for the whole country. Lathmar Holi of Barsane is also very famous. In this, men paint on women and women kill men with sticks and clothes. Similarly, in Mathura and Vrindavan, we celebrate the festival of Holi for 15 days. There is a song of Kumaon in which classical music concerts are held. It all starts several days before Holi. In Dhulandi, Haryana, the practice of harassing a brother-in-law is prevalent. A variety of festivals and celebrations of Holi are celebrated in different countries and in various religious institutions such as ISKCON or Banke Bihari Temple in Vrindavan. Which also has many similarities and many differences.
Holi is a festival that is celebrated all over the country of India. Everyone is waiting for Holi. Holi is a festival of colors. Everyone comes on Holi, forgets Shikave and hugs each other. Holi festival is celebrated with great pomp for 2, 3 days. Holi festival is celebrated with great joy and gaiety all over India. On the arrival of Holi, different types of sweets are made in everyone's homes. Some people only know about Holi that Holi is a festival of colors. But they do not know why Holi is celebrated, what is the history of Holi, why Holi is celebrated all over the country. How Holi is celebrated, what is the significance of Holi, who was Holika? Today we will introduce you to all these information through our post. With this, students in schools and colleges are asked to write essays on Holi. From this post, students can get more information about Holi so that they can participate in essay competition in school or college. 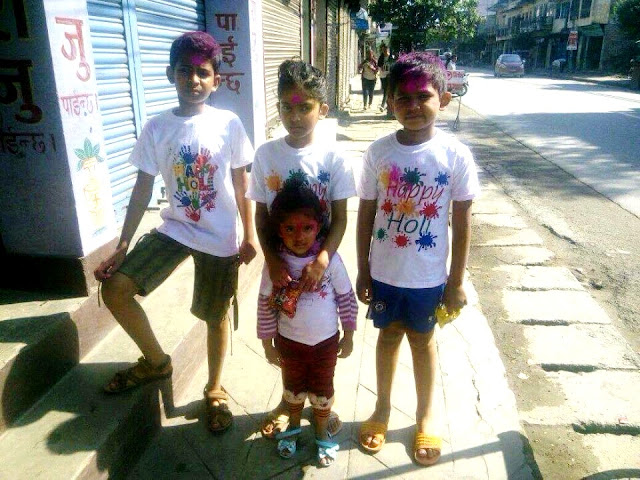 Like the festival of Holi, its traditions are also very ancient and its form and purpose has changed over time. In ancient times it was celebrated by married women for family happiness and prosperity and it was a tradition to worship the full moon. In the Vedic period, this festival was called Navratrishti Yajna. At that time, the law of taking offerings by placing half a grain in the field of sacrifice in the field was prevalent in society. According to Indian astrology, the New Year is considered to begin with Chaitra Shudi Pratipada. The month of Chaitra begins only after this festival. Therefore, this festival also marks the beginning of the New Year and the transition to peace. On this day, the first man Manu was born, so it is called Manvadishthi. 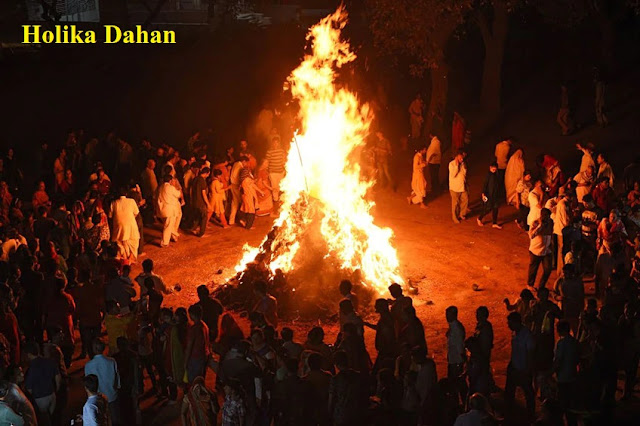 The first task of Holi is to wear a flag or stick. It is buried in a public place or yard of a house. Near this is the fire of Holika. All these preparations start long before Holi. The first day of the festival is called Holika Dahan. On this day, Holi is lit at squares and wherever wood is collected for fire. It mainly consists of wood and cow dung cake. In many places there is also a tradition of burning Bharbholia in Holika. Bharbholia are cow dung balls with holes in the middle. In this hole, garland is made by applying rope of mustache. A garland has seven weights. Holi is poured around the brothers' heads seven times before throwing fire on Holi. This garland is lit with Holika at the time of Holika Dahan at night. This means that along with Holi, a bad eye is also lit on the brothers. Made of wood and dupatta, Holi worship begins at noon. Homemade dishes are offered here. Holi is lit on the Muhurta drawn by astrologers on autumn day. New crops of wheat and grains of gram are also roasted in this fire. The burning of Holika symbolizes the end of all evils of society. It symbolizes the victory of good over evil. People in villages sing Holi songs and dance till late night. 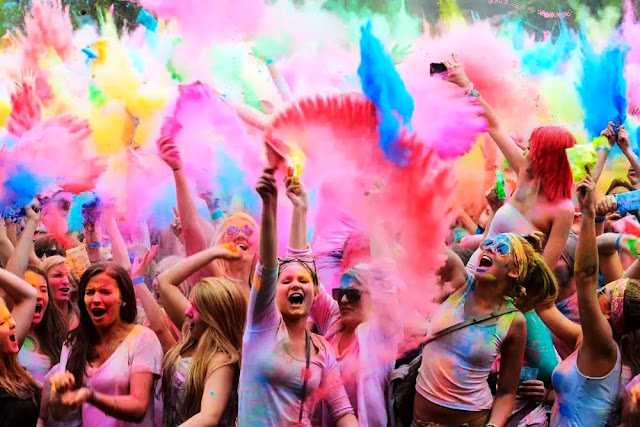 In India, the festival of Holi is celebrated in various regions. Holi of Braj is still a center of attraction for the entire country. Barsane's Lathmar Holi is very famous. In this, men painted on women and women beat them with sticks and tore clothes. Similarly, in Mathura and Vrindavan, the festival of Holi is celebrated for 15 days. The songs of Kumaon are classical music concerts in Sitki. It all starts several days before Holi. In Dhulendi, Haryana, it is custom to torture a brother-in-law. Dole Jatra of Bengal is celebrated as the birthday of Chaitanya Mahaprabhu. The procession leaves and the song accompanies. In addition, there is a tradition of playing dry gulal at Rang Panchami in Maharashtra, taking out a procession in Shimgo, Goa and organizing cultural programs after performing Shakti by Sikhs at Hola Mohalla in Punjab. Kaman Podigai of Tamil Nadu is primarily based on the legend of Kamadeva, while Yongsang in Yosang, Manipur is the name of a small hut built on the banks of a river or lake in every city-village on the full moon day. Holi is the biggest festival for the tribals of South Gujarat, Hori in Chhattisgarh has a wonderful tradition of folk songs and is celebrated with great pomp in Bhagoria, a tribal area in the Malwa region of Madhya Pradesh, which is a form of Holi. Fagua of Bihar is a festival of fun, and religious and cultural colors are seen in the Holi of Nepal. Similarly, migrants and religious institutions in different countries like ISKCON or Banke Bihari Temple of Vrindavan have a tradition of celebrating Holi and different ways in which there are many similarities and differences. 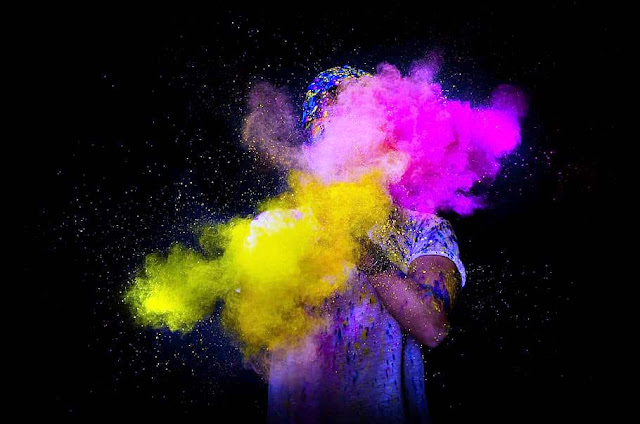 There is a detailed description of many forms of Holi in the Sanskrit literature of ancient times. The Shrimad Bhagwat Maha Purana describes a group of juices. Other works describe the festival called 'Rang', which includes Harsha's Priyadarshika and Ratnavali and Kalidasa's Kumarasambhavam and Malavikagnimitram. Kalidas is devoted to only one Santo 'Vasantotsavam' in the poem. Many Sanskrit poets like Bharavi, Magha and others have discussed Vasant much. Holi is described in Hindi first epic Prithviraj Raso composed by Chand Bardai. Holi and Phalgun month have special significance in Bhaktikal and Reetikal in Hindi literature. Ranging from devout poet Vidyapati to devotees Surdas, Rahim, Rasakhan, Padmakar, Jayasi, Mirabai, Kabir and Ritikalin Bihari, Keshav, Ghanananda, etc., the subject has been liked by many poets. Mahakavi Surdas has written 78 verses on Vasant and Holi. Padmakar has also done rich work related to Holi. 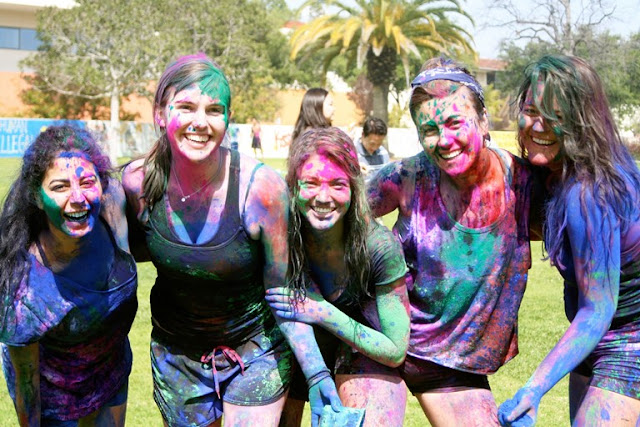 Holi is a festival of colors, a festival of laughter, but many forms of Holi are also seen. The prevalence of chemical colors in place of natural colors, intoxication rather than cannabis thawing, and the prevalence of film songs in place of folk music are some of its modern forms. But this does not diminish the pride of dhol, chajar, phag, dhamar, chaiti and thumari sung on Holi. There are many people who understand traditional music and are environmentally conscious. These types of people and institutions maintain the tradition of playing Holi with colors made of sandalwood, rose water, tesu flowers and natural colors, as well as contribute significantly to its development. After becoming aware of the side effects of chemical dyes, many people are returning to natural dyes themselves. The developed international form of Holi's popularity is also taking shape. Its usefulness in the market can be gauged from the new perfume Holi Hai released by the international establishment Kenozhamur on the occasion of Holi this year. 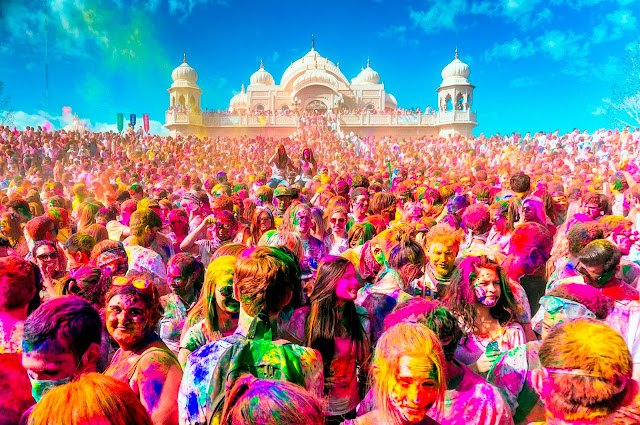