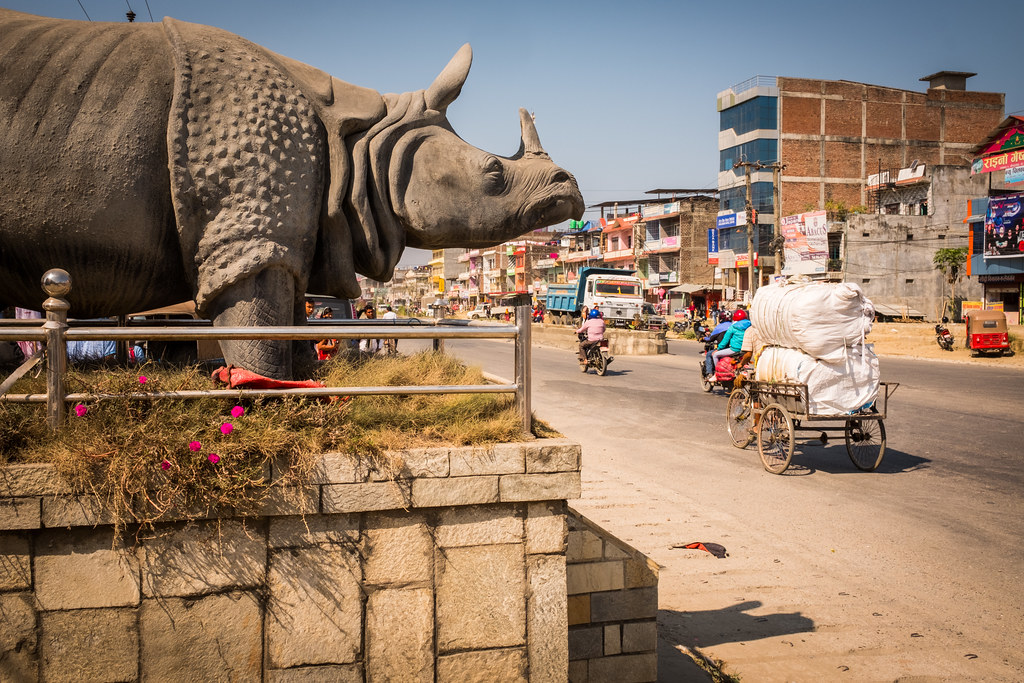 Sauraha is a popular city located on the banks of the Chitwan National Park. Sauraha is also a tourist destination among foreign and national tourists. Located in the southern part of Nepal in the Chitwan district of Sauraha province. 3. Sauraha is the entry point of Chitwan National Park, famous for Jungle Safari Tour in Nepal. The sunset on the banks of the Rapti River is one of the best things you can see in Sauraha. 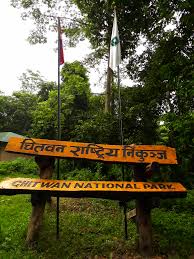 Sauraha is just 25 km from Narayanghat, which is one of the largest cities in Nepal. Sauraha was not as developed previously in terms of basic services, however, now Sauraha has many good hotels that provide good hospitality with modern services.
There are many hotels, restaurants, bars, shops, spas during your trip to Sauraha. Sauraha is at the center of everything, so this place can be the place of your seminar in terms of geographic location. Sauraha is the central meeting place for all participants from all over Nepal, which can save you a lot of problems and income.
Sauraha situated in Nepal is a South Asian country. China's autonomous region is in the north of Tibet Nepal and India is aware in the south, east, and west. 85 percent of Nepal's citizens are Hindu religious. Nepal is the largest Hindu religious nation by a percentage of the world. Nepali is the official language of Nepal and the people of Nepal are also called Nepali.

The geographical diversity of Nepal is very notable for a small area. The temperature of the Tarai is known here from the cold to the mountain ranges of the Himalayas. Nepal has the highest 14 snowy ranges in the world, of which Sagarmatha Everest (on the border of Nepal and China) is the highest in the world. The capital and largest city of Nepal is Kathmandu. Within Kathmandu, there are cities named Kirtipur in Lalitpur (Patan), Bhaktapur, Madhyapur, and Aptika. Other major cities are Pokhara, Viratnagar, Dharan, Bharatpur, Veerganj, Mahendranagar, Butwal, Hatauda, Bhairahwa, Janakpur, and Nepalganj.
In 1950, Chitwan's forests and grasslands expanded over 2,600 km2 (1,000 sq. mi) and were home to around 800 rhinos. When the poor peasants of the middle hills migrated to the Chitwan Valley in search of arable land, the area was later opened up to settle, and wildlife was hunted. In 1957, the country's first conservation law was to protect rhinos and their habitat. In 1959, Edward Pritchard G. conducted a survey of the area, recommending a protected area to the north of the Rapti River and a wildlife sanctuary to the south for a ten-year trial period.
Chitwan is located in the south of Nepal near the border with India, and although it is possible to fly from the capital Kathmandu (which takes just 20 minutes), we recommend a low carbon and more scenic option to drive. Both tailors and small groups visit the tourist park. Some head from the capital, five hours drive, others from Pokhara, entrance to Annapurna, six hours drive or two hours from the ancient village of Bandipur. After arriving here, you can explore the park on a walking safari, take a dugout canoe ride or a boat cruise or join a jog safari.

Chitwan DistrictSauraha is a village of Ratnanagar Municipality in Chitwan District and Chitwan Valley, in the Province No. 3 of southern Nepal. Chitwan district is one of the 77 districts of Nepal and is situated in the southwestern part of the Bagmati region as the fourth largest city of Bharatpur, Nepal. It covers an area of ​​2,238.39 km2 (864.25 sq. mi), and in 2011 had a population of 579,984 (279,087 males and 300,897 females). Bharatpur is a commercial and service center in central South Nepal and a major destination for higher education, health care and transportation in the region.

The people residing in Chitwan district are mainly peasant farmers who mainly cultivate food and cash crops like rice, maize, wheat, beans, lentils, mustard, and vegetables. The district is a major maize producing area of ​​Nepal, with 27,170 hectares (104.9 sq. mi) of maize cultivated in the year 2003–04. Maize is cultivated in winter and spring on irrigated / seasonally irrigated land and in summer on rain-fed land. Due to easy road access, the maize produced can be easily distributed to other parts of the country. The poultry industry in the district is an important part of the country's poultry industry.
Chitwan is famous in Nepal for growing mustard and producing mustard oil. This popularity of mustard in Chitwan is attributed to silt, the dominant soil type, resulting in the flooding of the Narayani River and tributaries. Chitwan is also deeply celebrated with clay soil, which is great for growing rice, wheat and vegetables such as cabbage, cauliflower, radish, potatoes, broccoli, cucumbers, pumpkins, and carrots. Chitwan is also famous for floriculture, mushroom cultivation, and beekeeping.

Currently, Bharatpur, Narayangarh's largest commercial area, is less accessible because of the movement of the main bus terminal, as the son of the previous king was angry with the politics of the city's citizens. Following the successful people movement in 2006, this bus terminal is no longer in use. Prachanda, a Nepali leftist revolutionary leader, believes that his childhood and youth were spent in Chitwan. The new community movement of Chitwan development is following the South Korean model. One of the largest rice mills, Agam Food Industries, Bharatpur-13, is located in Chitwan. The industry processes rice in various forms and also employs many local people. Chitwan is a very fresh place to live in.

Every year dedicated bird watchers and conservationists survey bird species occurring across the country. In 2008 they recorded 543 species in Chitwan National Park, which is much higher than any other protected area in Nepal and accounts for two-thirds of Nepal's species globally. Additionally, 20 black-chinned yuhinas, a pair of Gould's sunbirds, a pair of blossom-headed parakeets and a salty-breasted rail, an unusual winter visitor, were spotted in spring 2010.

The park's alluvial meadows are particularly important habitats for the critically endangered Bengal Florican, weakly understudied, gray-crowded staples, marsh Franklin, and many species of grass warriors. 2005 saw more than 200 thinly billed children in three different plains. [20] The Threat and Oriental Darter is a resident breeder in the vicinity of many lakes, where egrets, bitterns, cranes, and kingfishers abound.
The park is one of the few globally known breeding grounds of threatened eagles.
The peacock and forest forests live on the forest floor. 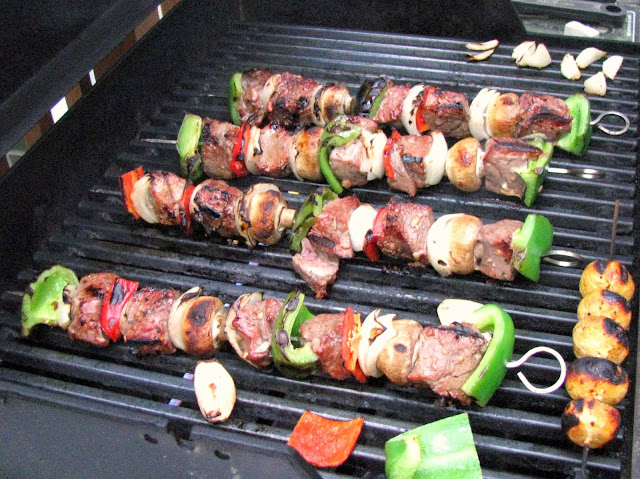 Chitwan is very popular for the delicious tass (Nepali: TAS), a spicy fried goat meat dish served with Bhuja or Chura in many restaurants. Momo, Sukuti Khaja Set and other nu dishes and Tharu food are also popular. Dal Bhat (Rice) is the staple food of the region, meat, and dairy products are also widely consumed. For centuries, traditional fermented foods and drinks constitute about 20% of the local diet. Depending on the height variation, finger millet, wheat, buckwheat, barley, vegetables, potatoes, and soybeans are grown. 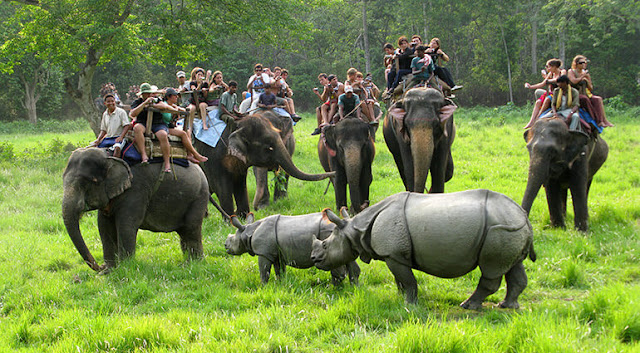 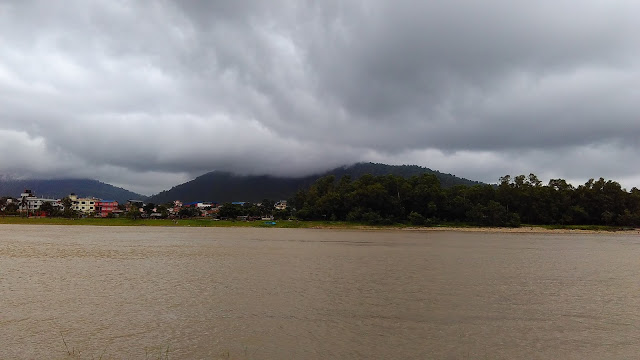 October to April is the best time to visit Sauraha. Pleasant weather and low grass in the park is the best part of this seasons where there will be high chances to see wild animals in the park. 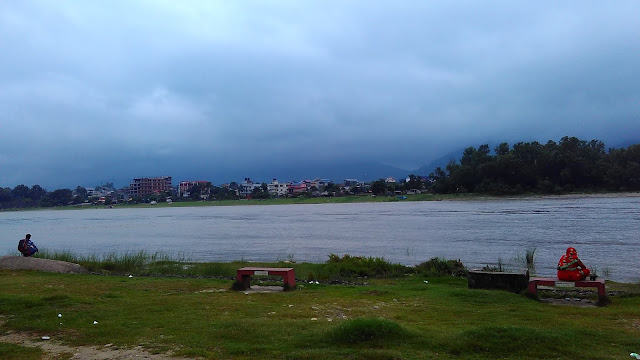 Chitwan has a tropical monsoon climate with high humidity all through the year. The area is located in the central climatic zone of the Himalayas, where monsoon starts in mid-June and eases off in late September. During these 14–15 weeks most of the 2,500 mm yearly precipitation falls – it is pouring with rain. After mid-October the monsoon clouds have retreated, humidity drops off, and the top daily temperature gradually subsides from ±36 °C / 96.8 °F to ±18 °C / 64.5 °F. Nights cool down to 5 °C / 41.0 °F until late December when it usually rains softly for a few days. Then temperatures start rising gradually. 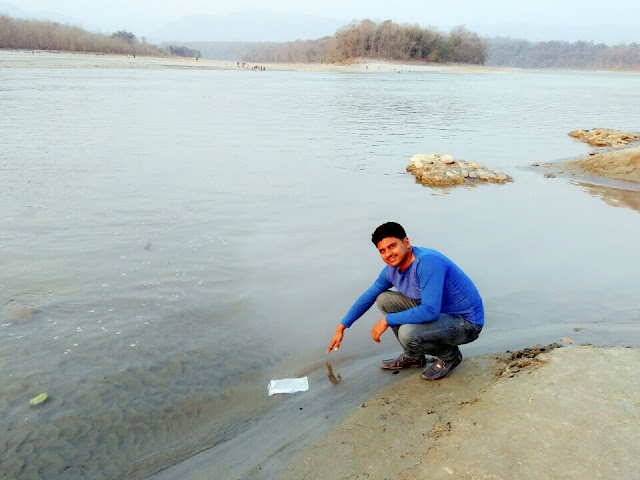 US $ 35 per person and National Park Permit which is mandatory
Maximum: 4 people on an elephant
Duration: 1.5 hours

v  CHITWAN JEEP SAFARI COST
All Day Reserve Jeep Safari
US $ 240 + National Park permit which is mandatory
Includes Private jeep and a guide for the whole day. It usually starts at 7 am.

US $ 30 per person on sharing of Basis and National Park Permit which is           mandatory
Maximum: 4 people on an elephant
Duration: 1.5 hours

US $ 50 per person + National Park Permit which is mandatory
Packed dinner will be served at this price
Minimum Pack: 2, Additional USD 20 required to be paid

US $ 30 per person + National Park Permit of which is mandatory.
Includes Shared jeep and a guide for half a day. It starts at 1 pm.

US $ 70 per person + National Park Permit which is mandatory
Duration: 4 hours
A birding trip of at least 3-4 hours to see more than 250 species of birds

Canoe Ride + Short Jungle Walk and Elephant Breeding Center Cost
US $ 20 per person + National Park Permit which is mandatory
Duration: 2-3 hours where it is preferred in the morning or afternoon.

US $ 80 per person + National Park Permit which is              mandatory
Duration: full-day tour with a naturalist
Minimum: 2 people required 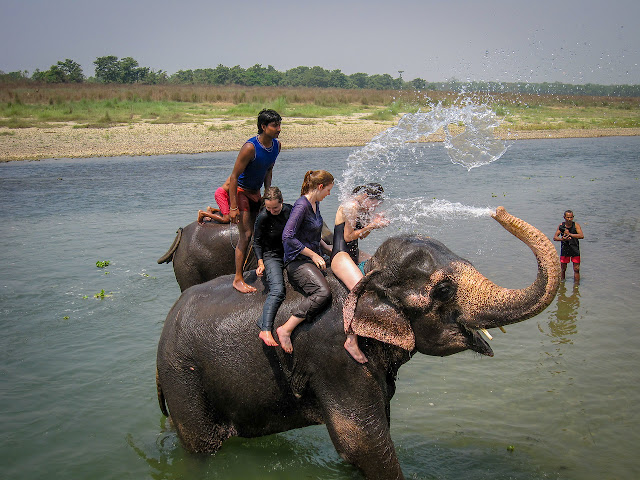 
⟴  NOTE:
All fares and prices may vary physically at some locations during festival time.